A diverse, thriving local economy has been identified as an important requirement for sustainability. A diverse mix of small business means that economies are more resilient and jobs are retained even if there are economic downturns in one, or more, sectors. Local small business have to deal with the consequences of their actions in the long term and therefore tend to be more interested in sustainability and minimising negative local impacts. In rural areas diversity of work and economic opportunities help to retain youth, maintain communities and reduce disruptive rural-urban migration.

Local economies can be supported through procurement which favours local production. In South Africa the Preferential Procurement Policy Framework Act (PPPFA) Act 5 of 2000 enables the government to use procurement to support increased local production. It sets out minimum local content requirements for designated sectors for goods, works and service contracts. 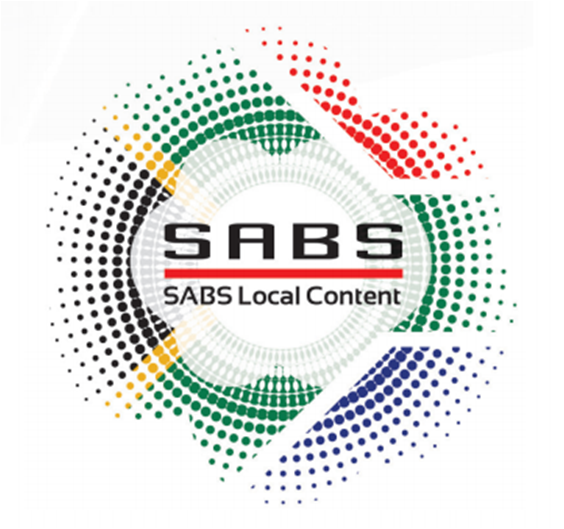 While the specification and verification process may seem bureaucratic and limiting it could lead to substantial government funding flowing to local businesses and industry instead of going offshore. If this flow is substantial, and reliable, significant growth in local businesses may be possible along with corresponding increases in employment and incomes.  While the system has been developed for government, the private sector can draw on the same principles in order to ensure that they procure in a way that supports and develops the local economy and therefore sustainability. Information on the standard can be found at:

The City of Tshwane has launched Tshepo 10,000, a training and employment programme aimed at youth between the age of 21 and 35. Youth selected for the programme will be trained by the University of Pretoria and Tshwane University of Technology. Training will focus on entrepreneurship, infrastructure development and maintenance and youth will be encouraged to set up cooperatives to work on city infrastructure in the following areas:

The success of the programme will be determined by the efficiency with which it is able to create skilled and motivated people and small cooperatives who are actively involved in long term ongoing work to improve infrastructure. If it works, the programme could provide a valuable model that municipalities could use to address the pressing problems of maintenance backlogs and youth unemployment. More information on the programme can be found at:

Within the sustainability field, resilience has become a new buzzword. There are an increasing number of programmes and guides on resilient cities, resilient architecture and resilient infrastructure being developed by organisations such as the World Bank and the United Nations. To understand these developments it is useful to review definitions and the development of the original concept.

There are many different definitions of resilience (Adger 2000, Perrings 1998, López-Ridaura, 2005, Zhou 2009, Holling 1973, Pimm 1984, Lele 1998). The concept has its origins in ecology and Holling describes resilience in terms of relationships within a system, the ability of a system to absorb changes and the capacity of these relationships to persist after this change (Holling 1973).

Defining resilience in the urban context is a relatively new and this tends to be multi-faceted. For instance, the World Bank defines resilience in cities in terms of social, infrastructural, economic and institutional resilience:


A review of resilience definitions reveals that while these may differ, there are two enduring themes.  The first relates to an ability, to maintain particular aspects of a system, in spite of change. Thus the characteristics of the system in terms of function, structure, identity and feedback are retained during, and after, change (Folke 2006).

The second relates to the capacity of a system to recover after a change. This refers to self-organising, regenerating and reorganising characteristics of a system that enables it to reform and maintain itself (Folke 2006).

The Construction Industry Board (CIDB) have developed a new standard which addresses how training objectives can be achieved as part of construction projects. The standard aims to help clients, such as government, who wish to achieve social and economic objectives such as training and job creation, as part of infrastructure and built environment development projects. The standard sets out contract skills development goals (CSDG) for different types of project including civil engineering, electrical engineering, general building and specialist projects. These goals are defined in terms of a notional cost of training opportunities which the contractor must spend on workplace training of employees and interns during the project, defined as a percentage of the total contract amount.

The standard provides definitions, calculation methodologies, contract clauses and monitoring processes which can be used to achieve training objectives.  A criticism of the approach is that it is based on cost which does not necessarily ensure quality or maximise impact in terms of the number of people trained. The prescriptive approach may also lead to increases in project costs. An alternative approach could have been based on improvements in levels of academic achievement and hours of training. This would link more neatly with the way courses and learning achievement are defined in terms of notional hours and credits by academic frameworks such as Unit Standards and Qualifications developed by South African Qualifications Authority (SAQA). The standard however is a significant improvement on the vague and unenforceable requirements for training often currently included in tenders and contract documentation. A draft copy of the standard is available on the CIDB’s website here:

There are many definitions for sustainability. Probably one of the most well known is:

“…development that meets the needs of current generations without compromising the ability of future generations to meet their needs and aspirations” (World Commission on the Environment and Development 1987).

“..the degree to which a system is sustainable will depend on its capabilities to produce, in a state of stable equilibrium, a specific combination of goods and services that satisfies a set of goals (the system is productive), without degrading its resource base (the system is stable)
even when facing ‘normal’ (the systems is reliable), ‘extreme’ and ‘abrupt’ (the system is resilient) or ‘permanent’ (the system is adaptable) variations in its own functioning, its environment or co-existing systems”.

The Human Development Index was developed by the United Nations as an alternative to economic progress indicators and aimed to provide a broader measure that defined human development as a process of enlarging people’s choices and enhancing human capabilities (United Nations Development Programme, 2007). The measure is based on:


An Ecological Footprint is an estimate of the amount of biologically productive land and sea required to provide the resources a human population consumes and absorb the corresponding waste. These estimates are based on consumption of resources and production of waste and emissions in the following areas:

The area of biologically productive land and sea for each of these areas is calculated in global hectares (gha) and then added together to provide an overall ecological footprint(Wackernagel and Yount, 2000). This measure is particularly useful as it enables the impact of infrastructure and lifestyles to be measured in relation to the earth’s carrying capacity of 1.8 global hectares (gha) per person.
at 15:01 No comments: 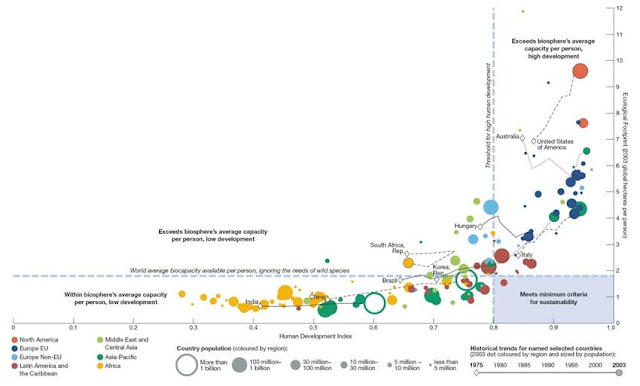 The graph also indicates national development trajectories (the lines between the diamonds and dots). For example, the trajectory of the USA has been steep, with a large increase in their ecological footprint and relatively limited improvement in their Human Development Index in the last 20 years. In contrast, Hungary, over the same time period, has improved their Human Development Index to achieve the minimum sustainability criteria and, at same time, reduced their ecological footprint.

This suggests that strategies based on an understanding of current HDI and EF performance can support a shift towards sustainability (Moran et al, 2008). This is supported by Holden and Linnerud, who argue through reference to purchasing price parity and ecological footprint measures, that developing and developed countries require different strategies to achieve sustainability (Holden &Linnerud, 2007)

There is therefore a strong argument that built environment development strategies should respond to local EF and HDI performance and, through appropriate provision, support sustainable development trajectories.
at 14:53 No comments:

Sustainability and resilience have become key concepts in new approaches to urban development. However, an understanding of these concepts and how they apply to cities is still being developed. While both concepts are regarded as important imperatives, it unclear how they relate to each other and whether one should be prioritised over the other. For instance, should models of future urban development aim for sustainable resilience, or for, resilient sustainability?


This paper reviews the concepts of sustainability and resilience from first principles and extrapolates implications for urban areas and the built environment. This is used to develop, and define minimum built environment standards and identify important physical characteristics associated with these concepts.

The analysis of materials in terms of sustainability is still in its infancy and is not well understood. Current methodologies tend to focus on environmental issues and rely on life-cycle assessment, or similar processes. While these systems address environmental impacts, few of them include social or economic aspects and therefore can not be said to assess sustainability (as defined by organisations such as the United Nations). In many developing countries the lack of social and economic indicators is a significant shortcoming as there is an strong interest in using construction and related industries to creatr beneficial social and economic impacts such as job creation.