The Cities in Motion index has been developed to measure and rank world cities in terms of their future sustainability and standard of living. The index is made up of the following ten criteria:

The index ranks London, Tokyo and New York in the top three. Cities are also categorised in terms of whether they are Challengers, High Potential, Consolidated or Vulnerable, as shown in the graphic below. 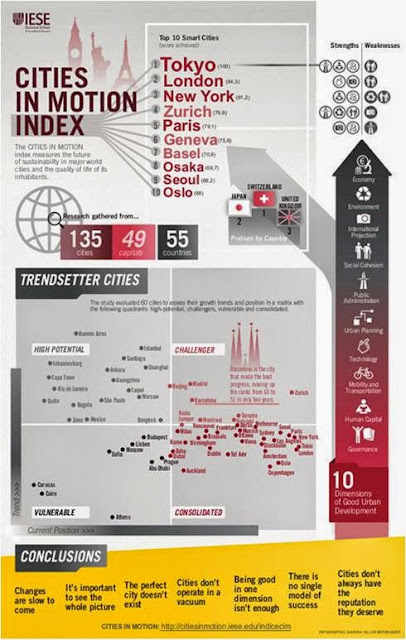 African cities such as Cairo and Johannesburg are classified as Vulnerable and High Potential. South African cities such as Pretoria, Johannesburg, Durban and Cape Town are ranked from 104 to 119, with Durban performing best, and Cape Town, worst.  A review of the spider diagram provided for Pretoria below indicates that reasons for low performance are the poor scores for social cohesion, international impact, human capital, environment and technology. 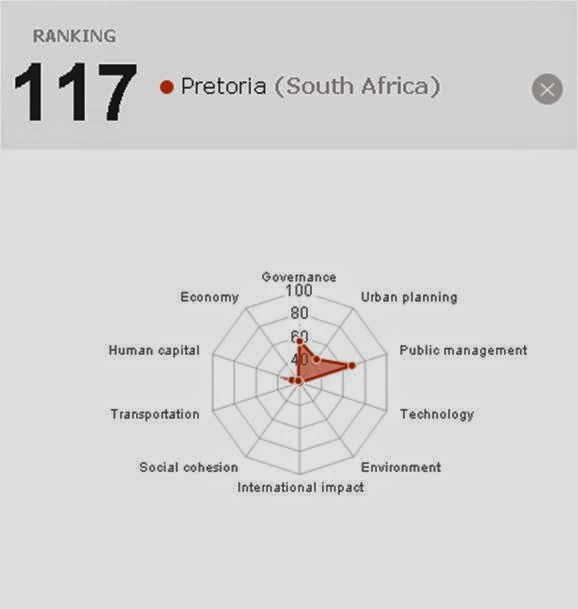 A review of these criteria reveals that perhaps some of the criteria are loosely named. For instance, social cohesion performance is represented by measuring the number of deaths per 1,000 inhabitants, the Gini coefficient; the unemployment rate, and the consumer expenditure on housing per capita, in millions of constant dollars per inhabitant in 2013. It is not clear how these indicators provide a measure of the social cohesion which is normally defined in terms of trust, consensus or intensity of social interaction within a population.

The basis for the inclusion of criteria is also not explicit. For instance, the indicators for ‘International Outreach’ are thousands of air passengers, number of meetings and thousands of tourists. While ‘International Outreach’ may be a good measure of business or tourism activity it is unclear why this is an indication of future sustainability, as increased air travel is associated with increased carbon emissions rather than improved sustainability. Here, other indicators such as the type and scale of information and communications technology (ICT) available, may more suitable as this enables meetings and economic activity through video conferencing, email and the internet without the carbon emissions associated with travel.

It could be argued that long term sustainability can be enhanced by investing in capability for increased resource efficiency. For instance, investments by cities in better ICT, more energy efficient buildings, improved public transportation and renewable energy can support high levels of economic activity while reducing carbon emissions and pollution at the same time. Criteria that measured this type of capability may be a better indicator of long term sustainability than current business activity. This idea is explored in the development of the BEST and SBAT indicator systems.